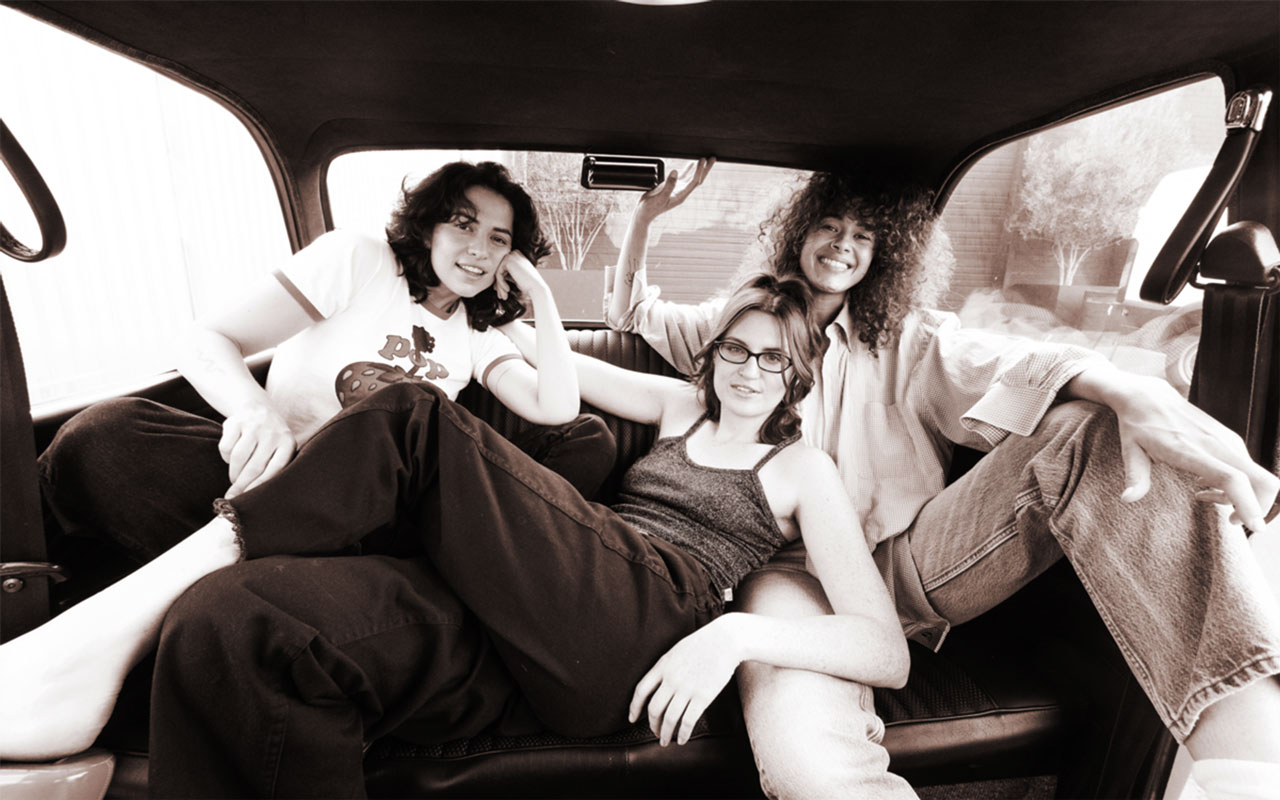 MUNA’s voice booms. The band is queer, loud, unshakeable in their music — and in their personal politics. The trio’s music is powerful and political, emblazoned with scars from addiction, abuse, and isolation. W Magazine called the band “a safe harbor in an often hostile world,” and they are. MUNA resonates.

But MUNA is just getting started. In May of 2021, the trio signed with Phoebe Bridgers’ label Saddest Factory Records. Vocalist and songwriter Katie Gavin says that the band’s relationship with Bridgers formed organically and their place at the label was “meant to be.” Joining a roster of like-minded creatives and working closely with Bridgers feels natural for MUNA: “We have so much respect for the way that she works,” Gavin says of Bridgers being head of the label. “It’s amazing to have a queer person and a woman in that role.”

MUNA’s new home at Saddest Factory brought about their new single “Silk Chiffon” featuring Bridgers, an anthemic nostalgia-filled summertime hit, sure to be one of the most addictive and uplifting songs of the year. “It’s a song for kids to have their first gay kiss to,” McPherson says, which is inherently, thunderingly political.

Also on the horizon: MUNA’s already-electrifying touring history just got brighter. In 2017, Harry Styles hand-picked the band as his opening act for his first solo tour. This fall, MUNA hits the road again: Their two headlining shows sold out in minutes. In September, they’ll play the BottleRock and Governor’s Ball festivals and accompany Phoebe Bridgers on tour. Plus, MUNA just announced they’ll join Kacey Musgraves on tour in 2022.

MUNA has only sharpened their knife since 2019’s Saves The World. With that album, they felt like they had something to prove. If Saves The World was self-reflective, heady, even self-flagellating, MUNA’s current state (as reflected in “Silk Chiffon”) exemplifies coming into oneself, chasing desires, following instincts. Undoubtedly, Katie, Naomi and Josette have so much more to say.

In 2021, the trio launched the humorous and candid GAYOTIC podcast on Spotify, where the band muses on a wide range of subjects in a free-form and aptly chaotic stream of consciousness manner. Over the past few years, MUNA has also flexed their production muscles, with remixes of Katy Perry, Tinashe, MARINA, Alanis Morissette, Of Monsters and Men, Zoe Wees, and Winona Oak songs. Plus, a highly anticipated third studio album is on the horizon.

“I think that there’s an element of where we’re at that embodies a self-assuredness and a self-possession that only comes with time and experience, and also with community,” Gavin says of MUNA’s new music. “We trust ourselves.” Maskin agrees: “We’re just trying to be real. Because if we’re not, it’s fucking boring.” They add, “As a band we’ve always wanted to try to communicate something that rings true in the three of us, and that will hopefully ring true with the world.”

In their next chapter, the trio doesn’t have time to be anything other than authentic. “We just want to make music for gay people,” McPherson says. “We just want gay people to be excited to hear it and think that it’s cool.”

MUNA is unflinching — in their music, their attitude, and their scorched-earth declarations of desire. In other words, they’ve never been more MUNA.

“We want it all,” Gavin says. “We’re allowed to want to be powerful.”