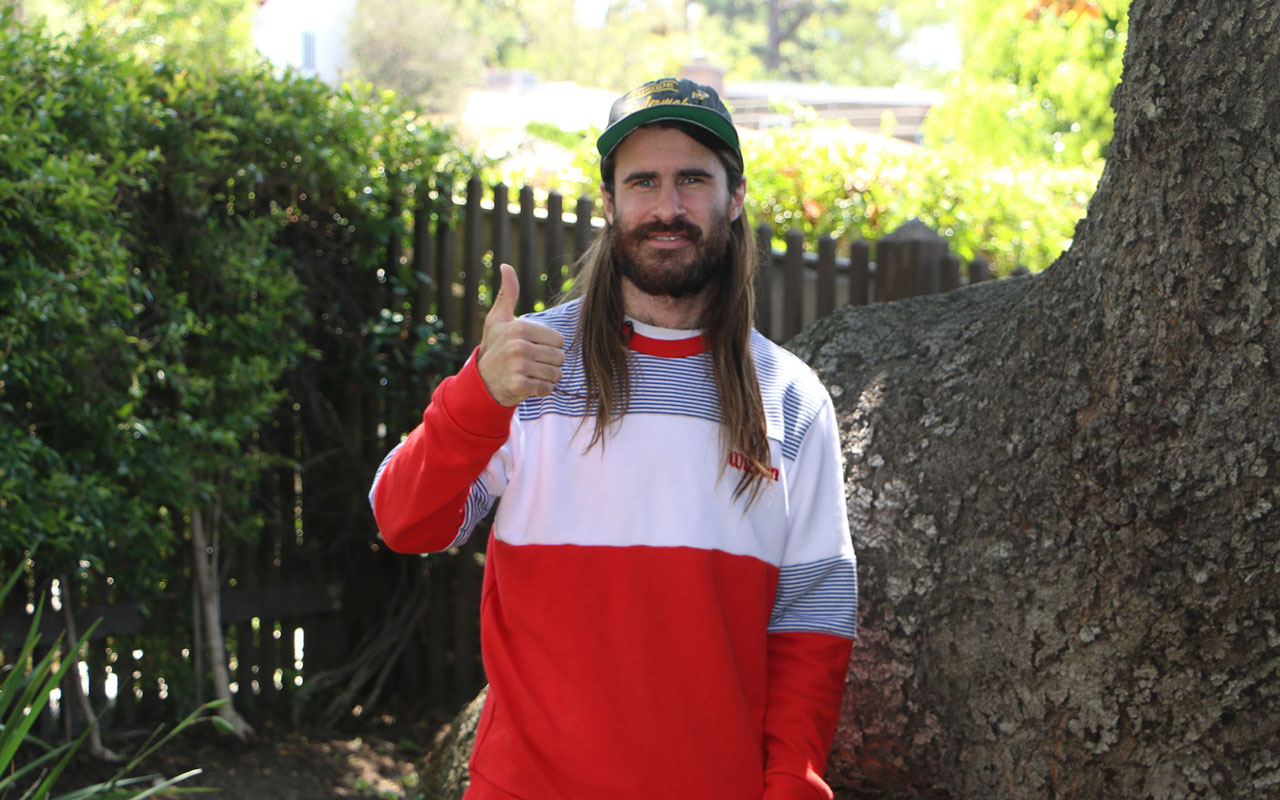 “If I can wake up every day for the rest of my life and make something new, that’s all I could ever ask for,” he explains. “It’s the only goal I’ve got.”

Take a listen to Lean Into Life, Petey’s exhilarating full-length debut, and you’ll start to get the picture. The songs here are explosive and cathartic, with moments of aching honesty and probing self-examination giving way to biting wit and joyful exuberance amidst a sea of arpeggiated synthesizers, distorted electric guitars, and shouted vocals. Is it indie rock? Punk? Electro-pop? Emo? Sure, but if you’re getting hung up on what to call it, then you’ve already missed the point. Lean Into Life is about release over analysis, about transcendence over fixation. That’s not to say that the writing isn’t deeply introspective—in fact, Petey’s lyrics are often unflinchingly candid—but rather that it’s the message not the medium that matters. Each video Petey posts to TikTok (where he’s already amassed nearly a million followers) takes place in its own little universe, just as each track on the album is its own emotional snapshot with its own framework and context. Taken as a whole, though, all those little moments add up to something profound and cohesive, a raw, insightful meditation on the ways that tiny, incremental changes can lead to seismic transformation.

“Everything I make is representative of the moment in which I make it,” explains Petey. “There’s no set in stone philosophy at play here, and I’m certainly not trying to tell anybody how to live their lives. I’m just capturing my experiences as they happen and hoping people can relate to them.”

It was that sense of personal connection that drew Petey to music in the first place. Born and raised in the suburbs of Chicago, he and his friends would regularly take the train into the city to see bands like Motion City Soundtrack, Alkaline Trio, and Fall Out Boy. Though Petey played drums in groups throughout high school and college, he never really imagined a career in music, instead focusing all of his energy and ambition on finding a way to make it to California.

“I watched The OC a lot as a kid, which made me obsessed with the idea of living in California someday,” Petey says. “I wanted to get there so bad it was like an itch I had to scratch, and when I finally made it in 2014, I had no plans beyond just being there.”

Realizing he needed to find a way to support himself in a hurry, Petey took a job in the mailroom at a large corporation. It was dull, unfulfilling work, but if he was being honest with himself, he didn’t feel particularly qualified to do much else, and his anxiety made interviewing for other jobs a nightmare. For the first two years, Petey was miserable, constantly looking for a way out but always running into the same dead ends. Then, during his third year on the job, Petey had a revelation: if he couldn’t change his reality, then he could at least change his perception of it.

“I started setting all these little challenges for myself,” Petey recalls. “‘How much can I enjoy work today?’ ‘How many friends can I make there?’ ‘How much fun can I have doing it?’”

The resulting changes may have seemed small on any given day, but cumulatively, they yielded a monumental evolution in Petey’s mental state. The happier he was, the more music he wrote; the more music he wrote, the better it got; the better it got, the more success he had; and before he knew it, he’d signed a record deal and was able to quit the job he never thought he’d escape.

“For me, everything grew out of making those subtle shifts,” Petey explains. “Finding ways to be happy where I was ended up being the thing that got me out of there.”

Working with producer Phil Hartunian, Petey launched his music career with a series of critically acclaimed singles and EPs that began hitting just before the COVID-19 pandemic, which meant that outside of a handful of dates with the likes of Joyce Manor and The Voidz, he was unable to tour and reach fans in any of the traditional ways. Petey’s hunger to create was as strong as ever though, so he decided to launch a TikTok account where he could embrace his love of dry, absurdist comedy and flex his muscles as a writer and actor, often playing multiple characters at once. Almost immediately, the videos began racking up massive numbers, and within a year of being on the platform, Petey had accumulated nearly 100 million views.

“The music and the comedy are all wrapped up together as part of the same thing for me,” he explains. “Writing and filming those videos totally fit with everything else I was doing.”

“Someone told me that a great way to create something original is to combine all of your favorite things and then fill in the gaps with your own personality,” says Petey, ”and that really rings true for me. When I sing, I want to sing like Isaac Brock from Modest Mouse. When I play guitar, I want to play guitar like Chris Walla from Death Cab For Cutie. When I produce synth parts, I want to produce synth parts like Kanye West. And when I play drums, I want to play drums like Travis Barker from Blink 182. All those approaches get combined with my own story in my songs.”

On Lean Into Life, that story is one of growth and acceptance, with Petey learning to make peace with doubt and darkness in order to make room for the light. Tracks like the hypnotic “California” and spare “Comfort In The Clutter” grapple with depression and anxiety, while tunes like the airy “Apple TV Remote” and desperate “Microwave Dinner” come to terms with the end of a relationship, and songs like the dreamy “We Go On Walks” and poignant “DON’T TELL THE BOYS” reckon with notions of masculinity and platonic love. As the record progresses, Petey finds again and again that happiness comes not from dramatic, life-altering events, but rather from an endless series of little, seemingly inconsequential moments, and by the time he reaches the pulsating title track, he’s landed on a new mantra for himself: “You’ve gotta lean into life just a little.”

“That song is about recognizing that things aren’t working, but instead of trying to take on everything at once, just making little changes that can start to point you in the right direction,” he explains. “I realized I didn’t need to take a huge leap in my life. I just needed to start leaning into things and taking tiny steps towards a healthier situation.”

Those tiny steps have brought Petey an awful long way these past few years. Where they’ll take him next is anyone’s guess, but that’s just fine. Petey doesn’t need to know the future or tell anyone what to do; he just wants to make stuff one day at a time.