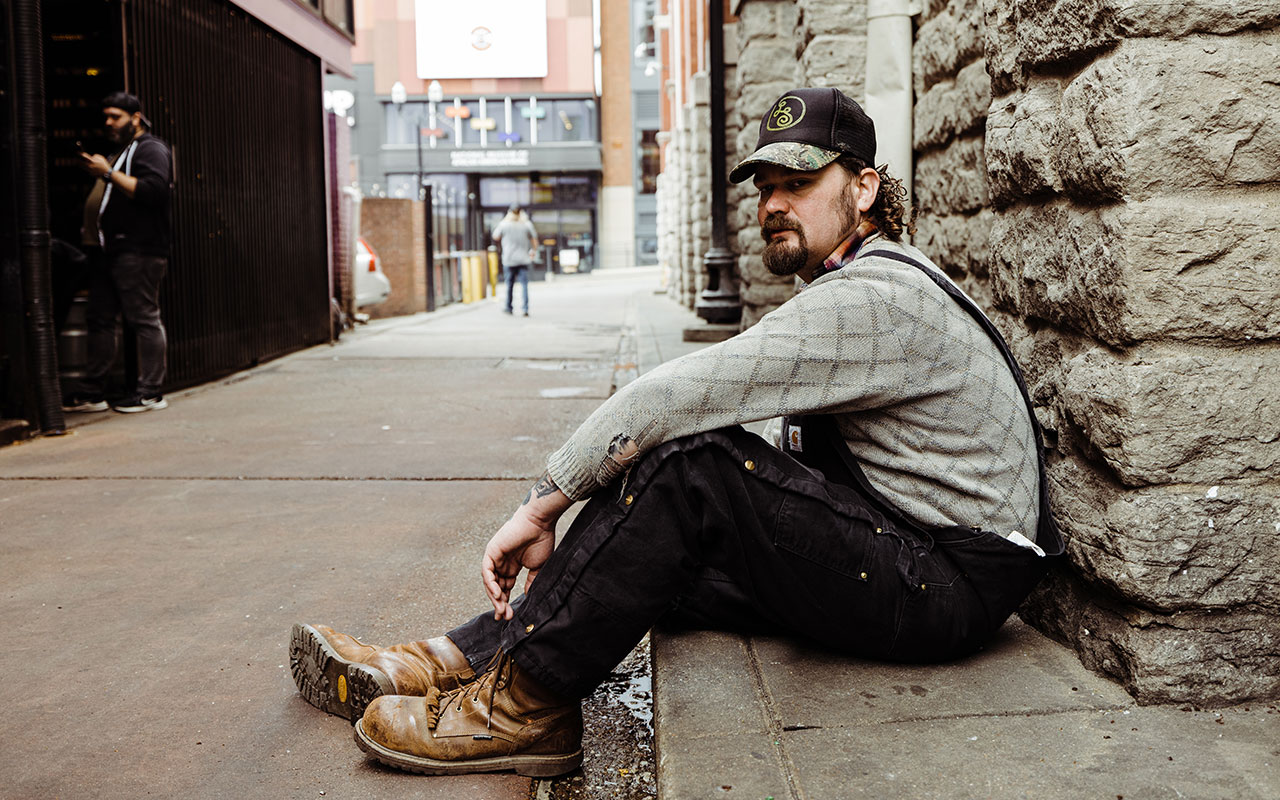 You may know Riley Downing from his work with acclaimed New Orleans combo the Deslondes, or perhaps from his similarly rootsy and wide-ranging catalog of songs with the Tumbleweeds – indeed, the Missouri-based singer-songwriter’s ability to set gripping, evocative narratives within soundscapes that weave together country, blues, folk, r&b, bluegrass, rock, soul and whatever else catches his ear is something that, once you hear it, is hard to shake free from. Same goes for that voice – deep, dusty and drawling, it’s an instrument that can stop you in your tracks with its character and expressiveness, as well as through Downing’s knack for laying out complex emotions in plainspoken, direct language.

For Downing, it all stems from an organic and intuitive approach to songwriting and playing. “I just try to write and sing about life as I live it,” he says simply. All those little bits of life are on full display on Start It Over, his first-ever solo album. From the protagonist in the opening country-soul jam “I’m Not Ready” (“Everybody’s rushin’ / I’m movin’ at my own speed”), to the cratedigger in the breezy “Start It Over” who seems as enamored of his old records as he is with his girl (“She was a 45 woman and I’m a 45 man”) to the overworked nine-to-five-er caught in a cycle of long days at work, late nights at home, followed by hungover mornings (“Long line of trouble / Troubles old and new / Once I was happy / But those days are through”) in the psych-folk lament “Crazy,” the 12 tracks collected on Start It Over unravel in a way that feels instantly relatable, as if Downing could be talking about you, me, or any one of us and doing it with the ease and empathy of a man who’s clearly been there, done that, and lived to play another day.

Following his last record with the Deslondes, Downing returned home to Missouri, helping out his brother with his plumbing business, embarking on some short solo runs and otherwise playing “mostly for old friends and old dogs and whatever other critters were within earshot,” he says. At some point, Downing and his Deslondes band mate, John James Tourville decided it might be fun to collaborate and release a 45 rpm single.

And so Downing and John James (that’s JJ to you) began a long-distance collaboration, adding longtime Deslondes producer Andrija Tokic (that’s Dre to you) into the musical chain as well. The three hashed out songwriting, arrangement and production ideas by passing demos back and forth from their respective homes – Downing in Missouri, JJ in North Carolina and Dre in Nashville – during the months of lockdown. As far as approach, everything was on the table. Downing recalls one of his demos being met with the suggestion that it needed a “Lou Reed/Fats Domino sound.” He laughs. “I couldn’t even imagine what that sounded like, but I had fun trying my best to imagine it.”

By the time the three met up, at Dre’s Bomb Shelter Studios in Nashville, everyone had been quarantined at home for two months, with nary a gig or jam session to be had. What they did have, however, was songs. And also, courtesy of Dre, a crack team of musicians. Who was along for the ride? Meg Coleman (Yola) and Jimmy Lester (Los Straightjackets, Blaze Foley) on drums, Dennis Crouch (Johnny Cash, Dolly Parton, co-founder of The Time Jumpers with Vince Gill) on upright bass, Jack Lawrence (The Raconteurs) on electric bass, Jeff Taylor (George Strait, Elvis Costello, The Time Jumpers) on keys, Peter Keys (P-Funk, Lynyrd Skynyrd) on Mellotron, Billy Contreras (George Jones) on strings, Derry DeBorja (John Prine, Jason Isbell and the 400 Unit) on Farfisa, and a host of backup singers, including Kyshona Armstrong, Maureen Murphy, Nickie Conley, Eric Brown and Vaughn Walters.

“The musicians that Dre picked out were just phenomenal,” Downing says. “They have endless amazing credits, they’ve all done great things and they were 110% in it.” So much so, he continues that “some of these songs on the record were first takes. And if they weren’t, then it was maybe take two or three.”

That first batch of tunes – five recorded in three days – included “I’m Not Ready” and “Start It Over,” as well as the strutting “Deep Breath,” the road-dog anthem “Never Coming Home,” and “Hey! Mister.” From there, the floodgates opened.

The trio continued to work together closely (but once again, from afar – there was a pandemic going on, after all) staying in constant communication to craft the next set of tunes, with Downing handling the writing and JJ and Dre working unwaveringly to bring his songs to life within vibrant and unique soundscapes. Over the summer, an impromptu road trip between JJ and Dre to transport a Hammond organ and speaker cabinet from Denver to the Bomb Shelter allowed the two to spend some additional time together doing pre-production, and they even made a quick stop in Missouri on the way back to Nashville for a quick check-in with Downing.

A month later, the three reconvened at the Bomb Shelter – this time for a relatively extravagant six days – to lay down the seven remaining songs. “I’ve known and worked with both of these guys for more than 10 years and have also lived with each at one point or another,” Downing explains of his connection with JJ and Dre. “We’re all old friends, so it was easy to get along and keep moving forward.”

Once again, the trio, along with the stellar backing musicians, captured inspiration in the moment, with JJ and Dre embellishing the tracks with all manner of instrumentation, from pedal steel, mandolin and fiddle to Mellotron, Farfisa and even guzheng (that’s traditional Chinese zither to you).

The end result reflects the mingling of past and present, traditional and unusual, that has long characterized Downing’s musical makeup. “I might be old-fashioned, but I’m not old-timey enough to not live in the modern world,” he says. Regarding his influences, Downing continues, “It’s a little bit of everything – I could probably make a long list and it’d be all over the place. I grew up going to country shows with my grandparents, but I was also angsty and played punk rock in high school. And then at the same time, I was getting into old folk and blues and stuff like that. So I never think in terms of a song having to be in ‘this’ genre or ‘that’ genre – I’m open to doing anything. I just enjoy writing and playing music.”

That joy comes through loud and clear on Start It Over, which, even in its most serious and somber moments – and also given the fact that it was recorded during a pandemic – radiates with a sincere appreciation for life and living in the here and now. As Downing puts it in “Deep Breath”: “Try to get your head screwed back on tight / Take a deep breath – it’s gonna be all right.”

This attitude, Downing says, was intentional. “There was so much going on in the world socially, politically and health-wise while we were making this record that I didn’t really know what kind of music people would even want to hear. But I knew I didn’t want to write a bunch of sad songs where you just stare at the fire and feel bad for yourself. I wanted the record to be about looking at things up on the upside – you know, ‘take a deep breath and we’ll all get through this.’ ”