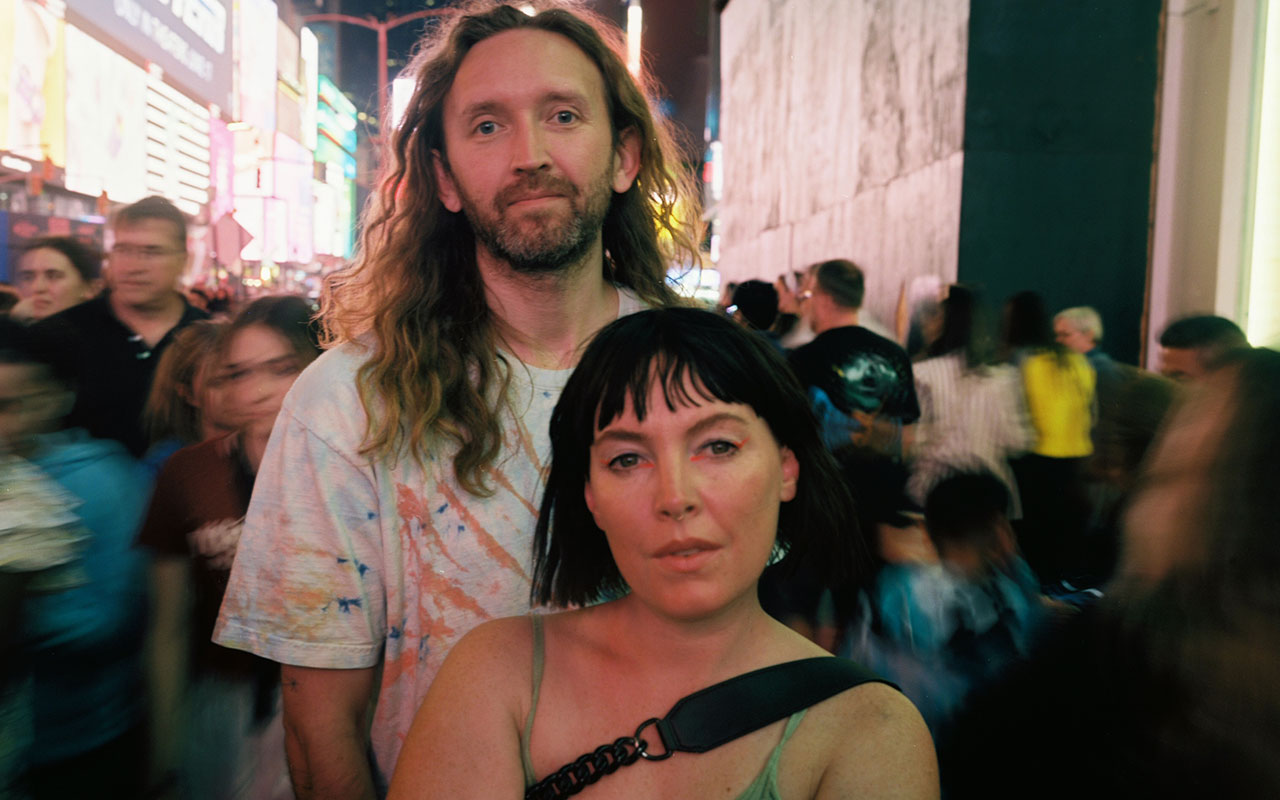 At the beginning of 2022, Sylvan Esso packed up and headed west. Cramming the contents of a recording studio into their Prius, Nick Sanborn and Amelia Meath drove from their home in Durham, North Carolina to Los Angeles, where they set up a makeshift studio in a small rental house on the east side and did something that surprised them: they wrote a song. And then another. “Even if we weren’t feeling good, we would just sit down and try to make something,” Meath says. “Pretty much every day that we did that, we got a song that we liked.”

Some bands can create entire albums on short-term writing jags, but until now, Meath says, Sylvan Esso was not one of them. But that speed — and the resulting looseness and live-wire energy in their songs — is one of many things that feels like brand-new territory in No Rules Sandy, their fourth studio album, out August 12, 2022. Describing their first three albums as a trilogy that is now complete, Meath and Sanborn see No Rules Sandy as the beginning of a new period, with songs that are “wilder and stranger and more cathartic than the band used to be,” as Sanborn puts it. “It feels like who we actually are,” Meath adds. “It just feels like us. We’re not trying to fit into the mold, just happily being our freak selves.”

The album’s title is taken from a snippet of background vocal in “Your Reality,” a slippery, complexly layered track in which Meath sings what feels like a preoccupying question of the post-pandemic world: “Let me remember how to live my life/were there rules originally/or are we learning how to be?” As in so many previous Sylvan Esso songs Meath’s voice is direct and dominant, but the “no rules Sandy” background vocal is different — echoing and hypnotic, swooping underneath Sanborn’s percussive synth as well as a string arrangement from Gabriel Kahane. Sanborn says that vocal, and the song itself, became a reference point for the album, “for how weird we could take it — how bare and strange something could be.”

“Sunburn,” the album’s debut single, and “Didn’t Care” also work as bridge songs, leaping from a pop music framework into the wilder unknown. With the crank of a bicycle bell popping in over the thumping bass track, “Sunburn” conjures a summer night’s dance party even as Meath’s locked-down vocal (“My favorite way to ruin me”) suggests nothing is as carefree as it seems. And while “Didn’t Care” exists fully as a poppy love song — the hand claps and talk of “shivers” — it’s also a song about somebody not caring when they meet their love; the frizzled keyboard chords and insistent background vocals promise there’s no simple ending for this story, either.

Meath and Sanborn have described the dynamic of Sylvan Esso as an argument between them, her irresistible hooks pushing and pulling against his adventurous, sometimes unsettling synths. No Rules Sandy is a complete merge — pop and electronic music fusing into something new that constantly builds on itself. With this album, Meath says, “we went back to the classic formula, which is us trying to impress the other one.” Take “Echo Party,” which opens with electronic warble around Meath’s voice as a simple beat behind her eventually yields to a deep synth wobble. There’s lightness and darkness tugging at each other, the ecstatic promise of a party (“there’s a lot of people dancing downtown”) that you might not ever be able to leave (“yeah we all fall down/but some stay where they got dropped.”) Sanborn’s synths nod to 90s electronic music throughout, but as with the full album, he says, “I want everything to feel like something you’ve heard before, but presented in a way you’ve never heard.”

Both describe No Rules Sandy as their most personal project — right in the title, after all, is Sanborn’s own nickname. The most intimate — but still enigmatic — details arrive in interstitial moments between tracks, featuring voicemails from loved ones, birdsong from outside their studio, Betty’s, the voices of children, and other life detritus transformed into eternal art. “It feels like this diary entry from this very specific time,” Sanborn says of the interstitials, which fill the gaps between songs and make No Rules Sandy an unbroken ribbon of sound, a source of wildness and energy that continues from the album’s first moment to the last.

Though Sylvan Esso very much remains a duo, the scope of their work has continued to expand since their landmark WITH concert — with a live band of ten — in 2019. 2021 marked the launch of their music label, Psychic Hotline, and in 2022 both Meath and Sanborn will launch projects with other collaborators. Meath’s The A’s, a new band with her Mountain Main partner Alexandra Sauser-Monnig, will release an album on July 15, while Sanborn’s Made of Oak project will release an EP collaboration with GRRL on September 2. The collaborations carry through to No Rules Sandy as well; TJ Maiani contributes his persistent drums to “Your Reality” and “Alarm,” while Sam Gendel’s saxophone lends a mysterious, unworldly quality to “How Did You Know” and album closer “Coming Back to You,” a stripped down and haunting track that’s unlike any Sylvan Esso song that has come before it.

As all these new chapters unfold and the Sylvan Esso umbrella expands, Sanborn and Meath continue to run their recording studio Betty’s in the woods outside Durham and think constantly about what’s next — without overthinking it too much.

“Our whole career up until now, I feel like everything’s been really considered, and we’ve maybe overthought a lot of the music,” Sanborn says. “I think that might be the ultimate effect of like the last record and the pandemic — feeling like, fuck that, I know what I want. And it’s now, or never. So let’s get out there and do it.”

By Katey Rich, Awards and Audio Editor at Vanity Fair