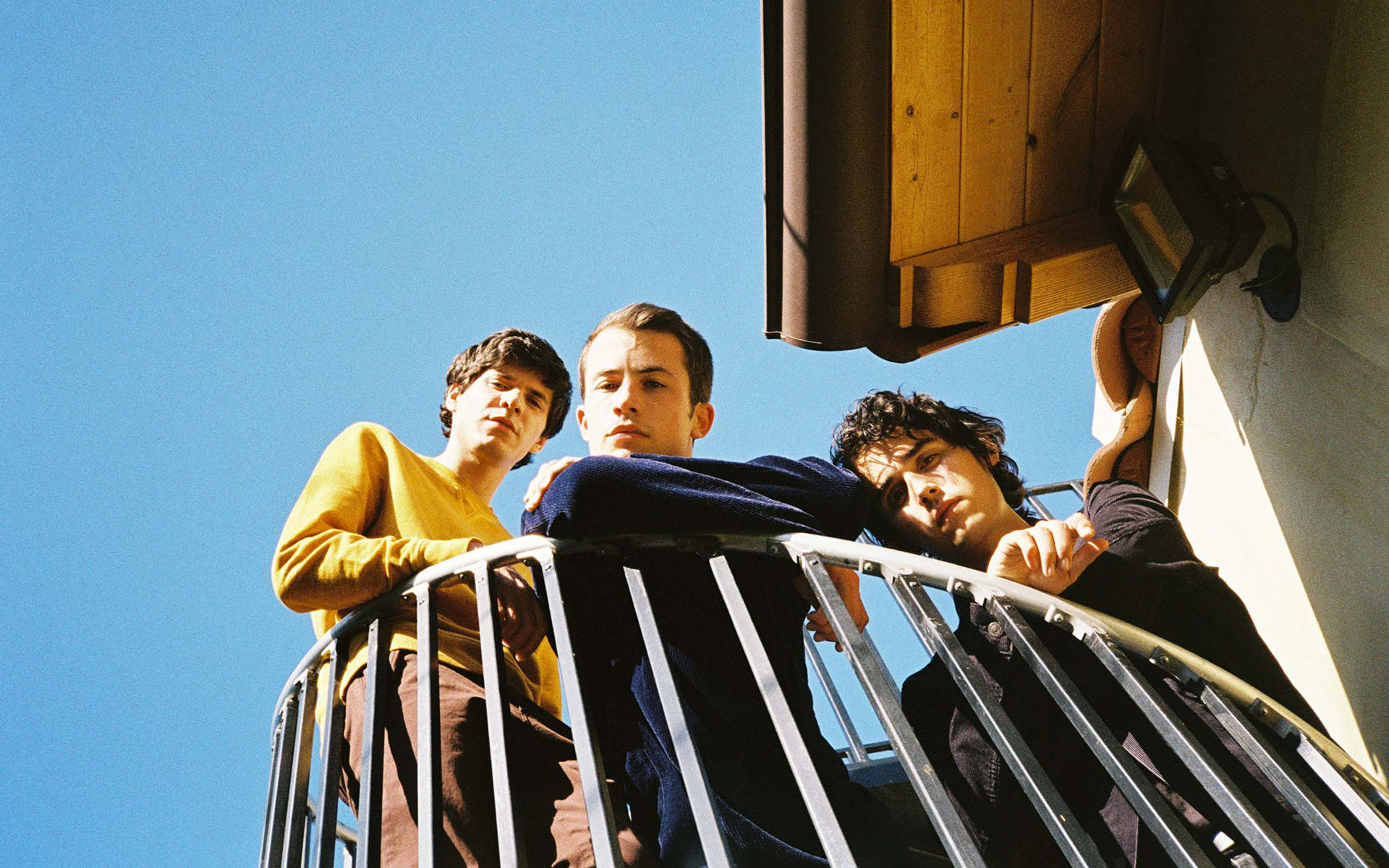 Best friends since the age of 11, the members of Wallows have spent most of their lives obsessing over music together, steadily gathering a musical vocabulary that’s expansive and erratic and wildly eclectic. On their full-length debut Nothing Happens, the L.A.-based trio puts that vocabulary to work and draws from infinite inspirations: scores to Spike Jonze movies, the Beatles’ most rhapsodic digressions, bedroom pop and lo-fi hip-hop and ’70s post-punk. The result is an album that’s endlessly unpredictable, yet somehow as familiar and deeply felt as the world inside your head.

Like their 2018 debut EP Spring, Nothing Happens finds Wallows dreaming up a restlessly inventive breed of alt-rock with the help of Grammy Award-winning producer John Congleton (St. Vincent, Future Islands, Angel Olsen). Recorded at Sargent Studios in L.A., the album sprang from a mad-scientist-like approach to song construction, with the band refusing to fall back on formula. “Whenever we came to a crossroads as far as where we could take a song, we always went the weird way,” says Preston. “There are more risks on this than anything else we’ve done,” adds Minnette. “It came from a place of never wanting to repeat ourselves, and making sure everything feels different from what came before.”

The ever-shifting sound of Nothing Happens isn’t just the outcome of Wallows’ following their most idiosyncratic instincts: it’s also a reflection of the album’s volatile climate. With each member now in his early 20s, Wallows look back on the impossible mess of adolescence and exactingly capture the most chaotic and unwieldy emotions. Told in vignettes at turns sharply detailed and hazed in the fog of memory, Nothing Happens ultimately embodies both the melancholy of growing up and a wary determination to move forward.

But even in its most heavy-hearted moments, Nothing Happens emits a potent and palpable energy, echoing the unchecked experimentation that fueled its making. On opening track “Only Friend,” Wallows telegraph crushing loneliness but sustain a feverish intensity, embedding the song with an elegantly manipulated guitar part that packs all the grandeur of a full string section. Meanwhile, on “Treacherous Doctor”—whose title the band arrived at by translating the words “inverted narcissist” from Mongolian to English and back again—desperation manifests as a gorgeous frenzy of distorted guitars, warped piano melodies, and recklessly bashing rhythms.

While songs like “Treacherous Doctor” channel an existential dread, Wallows also examine love and loss all throughout Nothing Happens. Partly inspired by Joy Division’s bass-driven minimalism, “Remember When” unfolds in frantic harmonies and starkly pleading lyrics (e.g., “Don’t let me be one of the people that seek a lost romance”). On “Are You Bored Yet,” singer/songwriter Clairo lends her gauzy vocals to a bittersweet back-and-forth about the confusion that comes with young love. “When you’re in a relationship and you’re really young—which is an experience all three of us have had—it’s really easy to ask yourself, ‘There’s so much for me to do in my life, am I supposed to just be in this forever?’” notes Preston, who came up with the song’s demo. And with “Worlds Apart,” Wallows wander through what Lemasters describes as “the different stages of realizing someone’s not into you,” offering up fragments of strangely beautiful poetry (“Do I exist in your heart? Or did the ship sail away while I was in the gift shop?”) before collapsing into a fantastically shambolic drum sequence.

After the jittery splendor of “I’m Full” (a fuzzed-out meditation on substance abuse and social anxiety), Nothing Happens closes out with the gut-punching epic “Do Not Wait.” And though the song begins in a desolate mood, Wallows end on an intensely personal message of reassurance. “‘Do Not Wait’ is sort of a letter from me to my younger self,” says Minnette. “It’s saying, ‘All this stuff is going to happen to you, and it’s going to feel like the biggest deal in the world—but just try to know that something good comes out of everything bad, and it’s all gonna be okay.’”

From song to song on Nothing Happens, Wallows show an undeniable camaraderie that traces back to when Lemasters and Minnette first met as child actors (an endeavor that later led to Minnette’s starring role on Netflix’s 13 Reasons Why). With Lemasters hailing from Ohio and Minnette from Indiana, their moms connected via an online group for newly transplanted stage parents, and the boys quickly bonded over their love of music. “I was listening to the Beatles and Led Zeppelin and Dylan loved all that too,” Lemasters recalls. The two started writing their own songs, linked up with L.A. native Preston through San Fernando Valley-based music program Join the Band, and soon began scoring gigs at iconic venues like Whisky a Go Go. “We kind of grew up on Sunset Strip,” says Preston. “Our friends would come out to the shows, and afterward we’d all walk down to Millions of Milkshakes together. It was very wholesome, like we were all family.”

After spending their teen years honing their songcraft and sharpening their live set, the trio self-released four singles in 2017. “We didn’t have a label or management or anything—we didn’t even have a name when we recorded those songs,” says Lemasters. Eventually calling themselves Wallows (a word whose many definitions include “to indulge in an unrestrained way in something that creates a pleasurable sensation”), the trio drew buzz with “Pleaser”: an urgently catchy track that shot to #2 on Spotify’s Global Viral 50 chart, amassing over 11 million streams on the platform to date.

Following the breakout success of “Pleaser,” Wallows embarked on a headlining national tour and soon inked a deal with Atlantic Records. In April 2018 they put out Spring and won praise from the likes of TIME and Stereogum, with the EP hitting #15 on Billboard’s Vinyl Albums chart. Named a Critical Cut on SiriusXM’s Alt Nation, Spring’s lead single “Pictures of Girls” reached #1 on the alternative specialty radio chart, then landed at #4 on the year-end chart. Wallows also made their television debut with “Pictures of Girls,” taking the stage on The Late Late Show with James Corden in May and introducing the world to their impassioned live performance. Since then, they’ve played their first-ever international dates, in addition to appearing at major festivals like Lollapalooza, Austin City Limits, Camp Flog Gnaw Carnival, Life Is Beautiful, and Voodoo Music + Arts Experience. The band is now gearing up for another headlining tour, which they’ll kick off this spring by making their Coachella debut.

For Wallows, the release of Nothing Happens marks the realization of one of their most closely held and near-lifelong ambitions. “One thing we’ve said since we were like 14, and first had our minds blown by all these bands who mean a lot to us, is that we’d love to make an album that other people could feel the same way about,” says Preston. “We talked about our debut album so much growing up, and this record really feels like the most honest statement we could make after all these years of working together,” Minnette adds. “We’d love for people to feel that and find their own meaning in the songs, and hopefully get inspired to go out and make something of their own.”